Why Are There So Many Bible Translations?

There are countless Bible translations: King James, NIV, The Message, and so on. Why?

Say you have a desire to read the Bible for the first time. So you go to your local bookstore or check online for a free version. But rather than simply find a copy of the Bible, you’re faced with hundreds of choices. You feel overwhelmed.  Who knew there were so many versions of the Bible?

Then you realize that there are dozens and dozens of different translations of the Bible, often known by their abbreviations: King James Version (KJV); New International Version (NIV); English Standard Version (ESV); New Revised Standard Version (NRSV); New Living Translation (NLT)—the list goes on and on.2

How do you choose a Bible? What’s the difference between all these translations? Why are there so many?

The Original Manuscripts: Hebrew and Greek

The answer to these questions can begin to be found by first understanding that the books of the Bible were originally written in Hebrew and Greek (with a few sections in Aramaic). Here is how Genesis, the first book of the Bible, begins: 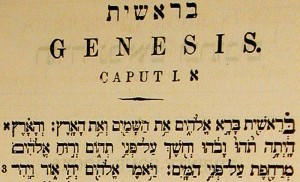 The earliest manuscript fragment of the New Testament we now have is called p52 (papyrus number 52).  It contains a few words of the Gospel of John: 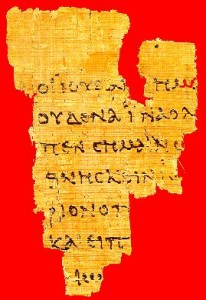 Unless you know these languages, you can’t read even one sentence in either of those images. Therefore, you can’t read the Bible. Translations make it possible for us to read and understand the Bible for ourselves.

This need for translation was recognized over two thousand years ago. The Old Testament, originally written in Hebrew, was translated into Greek long before the time of Jesus. As the Christian movement grew, both Old and New Testaments were translated into other languages, including Coptic, Syriac, Ethiopic, and Armenian. Because of the Roman Empire’s influence, a Latin translation (called the Vulgate) became the most widely used version of the Bible for the next thousand years.

English Translations of the Bible

In the fourteenth century, a man named John Wycliffe produced the first complete English translation of the Bible (translated from the Latin Vulgate, not from the original Hebrew and Greek writings). In the seventeenth century, the king of England authorized scholars from Oxford and Cambridge to produce a new and official English translation from the original Greek and Hebrew languages, which became known as the King James Version (KJV) or Authorized Version (AV).3

The King James Version remains popular among many English-speaking people. Nonetheless, a variety of English translations have appeared in recent years for three important reasons.

First, scholars and archaeologists have made amazing discoveries in the past two centuries. Today, we have Hebrew and Greek manuscripts that are much older and closer to the originals than those available to the scholars who originally translated the King James Version.

Second, the English language itself has evolved in the last four hundred years. While the Shakespearean prose of the King James Version may feel more traditional, eloquent, and sacred, it does not represent the way people communicate today (nor in Jesus’ day).

Third, numerous English versions exist today simply because different teams of scholars take different approaches to translating the texts. These approaches are generally described on a scale of formal equivalence (word-for-word translations) to functional equivalence (thought-for-thought or meaning-for-meaning translations). In order to be accurate and communicate well to their target audiences, translations have to mix formal and dynamic elements.4

Translating the Bible from Hebrew and Greek into English is no easy task. It is time consuming and tedious. Scholars admit that no translation can ever fully convey what the original language intended. For example, there are some words and expressions in Hebrew and Greek that simply don’t have English equivalents. Therefore, every translation team must be creative in their endeavor to convey the Bible’s meaning across cultural and linguistic distance.

This is why the best scholars in the world are assembled to produce accurate and readable versions of the Bible. Publishers are careful to check and recheck their translations with various experts, as their professional reputations are on the line when producing a new Bible version. As a result, we can trust that the current English translations we read are faithful to communicate the overall meaning of the Bible’s original message.

Here are some recent English translations and their respective approaches to translation:5

Each of these translations is valuable. Some Bible readers appreciate the formal approach of the ESV or KJV. Others have turned to The Message to get a fresh perspective on the ancient collection of books that makes up the Bible. Many find the accuracy and readability of the NIV most appealing. Whichever translation you choose, the words will be easy enough to understand. It is the meaning of those words that you will have to wrestle with!

Copy and paste the code below into your website.

How to Select a Bible

How to Select a Bible

Is the Bible Relevant?

What Is the Apocrypha?

What Is the Apocrypha?

What Is the History of the Bible?

What Is the History of the Bible?